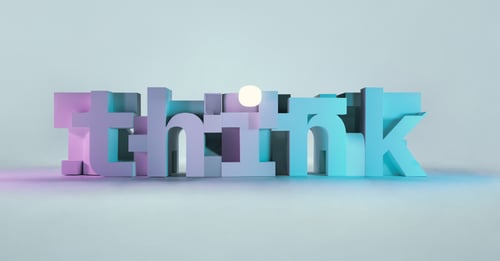 IBM Think took place on May 11th and for the second year, it was a virtual event. The event consisted of a variety of sessions and different tracks allowing for all participants to take the time to stop and think deeply about business, technology and the future.

The event was kicked off with a keynote address from CEO Arvind Krishna who spoke about the changes in technology being so profound and fast in the last year especially.  For the first time, digital transformation spending increased while the GDP dropped an alarming rate.

The pandemic forced companies to pivot in real time and transform more quickly than they originally planned. Today speed and flexibility are the new currency. In fact, IDC predicts a 7.4 trillion spend in digital transformation in the next 3 years.

My favorite quote of the day was that although “we've talked about digital transformation for years, what's changed is that having a strong digital foundation is no longer seen as a source of competitive advantage but an existential priority.”

The COVID-19 crisis revealed to every leader just how crucial technology will be to their resiliency plans. One study during the pandemic found that companies were accelerating their tech transformation plans by an average of six years.

IBM’s vision and market strategy are stable and clear and this was reinforced during the event. Hybrid cloud and AI are where its investments will continue to be.

Hybrid cloud will define the technology strategy of businesses over the next decade. It is about extending data centers to the cloud, building and deploying cloud-native apps to any location, and connecting an enterprise’s back office to the front office.

Only 25% of workloads have moved to the cloud so far and 81% reported using two or more clouds. Companies need a platform that will allow them to be agile and hybrid is the norm.

IT environments are becoming more complex across datacenters and the cloud and hybrid cloud captures more value than a traditional cloud. The openness harnesses innovation power and with IBM’s acquisition of Red Hat, it has a great combo of open-source, support and vertical integration with Cloud Paks.

IBM understands that businesses need a clear and critical path to modernize their mission-critical systems with advanced cloud services and a hybrid-cloud strategy is about meeting you where you are in your journey. It’s about giving you the ability to leverage the capabilities and benefits of the cloud across a whole spectrum of environments.

AI - data is eating the world

90% of the world’s data has been created in the last two years and by 2025 data is going to grow to about 175 zettabytes according to IDC. That’s the equivalent of a stack of Blu Ray discs that can get to the moon and back 23 times. That is a lot of data and the only way to make sense of the phenomenal amount of data is through artificial intelligence.

The importance of AI just keeps increasing. For example, chatbot conversations have gone up 706% in this pandemic. Customers want self-service and AI is helping customers help themselves.

The most exciting and promising change being seeing today is companies are not just digitizing things that were once out of reach what they're doing is far more consequential, they are rebuilding entire business models around the possibilities of digital technologies like hybrid cloud and AI.

IBM announced a new interactive AI solution called Watson orchestrate. Watson orchestrate is designed to increase the personal productivity of business professionals across many areas’ such as sales, human resources, operations and many more. It automates work tasks to increase productivity. This isn’t a static bot programmed by IT. You initiate work in natural language, and Watson Orchestrate uses a powerful AI engine to combine pre-packaged skills, on-the-fly and in-context, based on organizational knowledge and your prior interactions.

Some other announcements made

IBM’s hybrid cloud and AI will help make your business more resilient bringing AI to your data everywhere it lives, helping you make better decisions.  And as Krishna said during his keynote “Two key technologies that will determine the success of organizations are hybrid cloud and AI”.

Choosing the cloud to eliminate IT management: beware of these potential pitfalls

Virtualising your IT infrastructure and migrating to the cloud will most likely bring significant...

Managed Services: Get rid of the mental load and stress associated with IT operations

Stop for a moment and ask yourself the following question: "How would my life at work be if I were...

IBM Think Canada took place virtually on October 22 and it was a very inspiring and eye-opening...